For my first review, I re-read an old favourite of mine. This review was originally guest posted on Once Upon a Time. 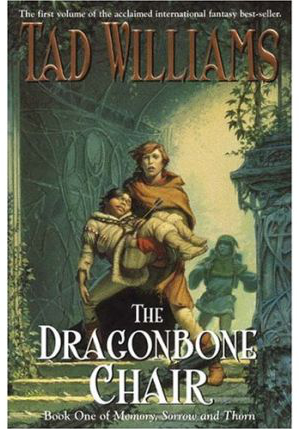 E-copies: Not available from Amazon • Ebooks.com

Simon is a teen-aged kitchen-boy in the ancient Hayholt castle. He isn’t very good at the tasks the Mistress of Chambermaids sets him, instead preferring to daydream and make-believe around the castle grounds and buildings. Everything changes for Simon when a series of events is kicked off by old King John’s death. John’s eldest son becomes King Elias, but he keeps odd and sinister company with a priest and the golden age of King John’s reign starts to decline. Simon is forced out of the castle to make a journey to find and join the cause of the old King’s second son, Josua.

The world of Osten Ard is rich and detailed, populated with many races each with their own history, religion and heroes. Tad Williams paints vivid pictures of locations and events – in fact sometimes the descriptions can go on a bit long, but it gives the story a very realistic quality. The story was described by one critic as “The fantasy equivalent of War and Peace”, so you get the idea of the weight of some of the writing.

Events start off slowly with a lot of scene-setting, but once the action starts it progresses fairly quickly. The story is told from the viewpoint of several characters in different locations. I must admit the character of Simon annoyed me until I realised that he is meant to be a whiny teenage boy at the start and he does become more bearable as the story progresses. I felt some of the other characters weren’t as engaging as they could be, with the dialogue a little wooden at times.

The Memory, Sorrow and Thorn series reminded me of another series that is being widely discussed at the moment – A Song of Ice and Fire by George R. R. Martin. The story is similar to ASoIaF in some ways in the detail of the world and its people, but I didn’t find it quite so confusing to keep track of all the characters and politics in The Dragonbone Chair.

I recently re-read this book – the first time I read it was probably around 15 years ago, so I had mostly forgotten the details of the story, only remembering that I loved it at the time. I also don’t remember how my younger self must have reacted to some of the events of the book – Tad Williams is not afraid for his characters to be killed or hurt in nasty ways and it adds a certain anxiety while reading it. There’s no particularly adult content, but some events could be nightmare material for very young readers.

If you’re looking for a story of adventure, intrigue, magic, battles and prophecies then The Dragonbone Chair will not disappoint. I gave it a total of four stars only due to the length and weight of the story – a truly “epic” fantasy that may end up putting some readers off. It still remains one of my favourite reads.