Review: The Wicked and the Just, J. Anderson Coats 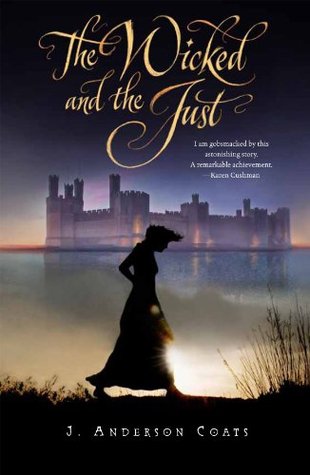 Title: The Wicked and the Just (Goodreads)

Cecily’s father has ruined her life. He’s moving them to occupied Wales, where the king needs good strong Englishmen to keep down the vicious Welshmen. At least Cecily will finally be the lady of the house.

Gwenhwyfar knows all about that house. Once she dreamed of being the lady there herself, until the English destroyed the lives of everyone she knows. Now she must wait hand and foot on this bratty English girl.

While Cecily struggles to find her place amongst the snobby English landowners, Gwenhwyfar struggles just to survive. And outside the city walls, tensions are rising ever higher—until finally they must reach the breaking point. (Goodreads)

The thirteenth century was not a good time to be Welsh. Newly subjugated by the English, the surviving people of North Wales were oppressed and taxed to the hilt, hemmed in by new castles of stone and walled cities such as Caernarvon. The Wicked and the Just shows little of the beauty of the Northern Welsh countryside and is more focused on the gritty day-to-day life of a medieval city.

Early on in the book, Cecily spends a lot of time bitching about having to move to Wales and about not having any gowns to wear, getting all upset at servants looking at her and generally being a horrible little harpy. Gradually as the story goes on we see a more compassionate side to her, and also a dry sense of humour that made her telling of the story bearable.

Some of the story is told from Gwenhwyfar’s point of view. She is a very strong but bitter character – rightfully so as she is being made to serve those she battled against in the occupation. The switches in perspective are well-written and allow us to see life from both the English and Welsh sides.

Un-likeable characters aside, there is far more to this story than meets the eye. The beginnings of rebellion are hinted at early on in the story, but aren’t discussed openly until much later. There’s a feeling of a darker story going on in the background while Cecily prattles on about “doing the marketing” or about the neighbour’s toddler getting into her herb garden.

Even though this review sounds negative, I’ve given The Wicked and the Just four stars because it is an extremely well-written account of what life was supposed to have been like in medieval Wales. Despite the grim subject material there were several occasions that made me laugh. The story is very compelling towards the end and the ending is satisfying, although I felt I needed some cheering up afterwards!

If you’re a fan of historical fiction, you’ll enjoy the descriptions of daily life and historical events in The Wicked and the Just. If you’re not, then the harshness of the story and the cattiness of the characters may just turn you off.

What did other people think of The Wicked and the Just?