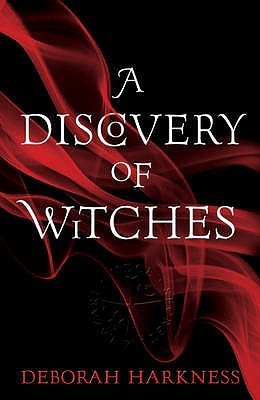 Title: A Discovery of Witches (Goodreads)

Deep in the stacks of Oxford’s Bodleian Library, young scholar Diana Bishop unwittingly calls up a bewitched alchemical manuscript in the course of her research. Descended from an old and distinguished line of witches, Diana wants nothing to do with sorcery; so after a furtive glance and a few notes, she banishes the book to the stacks. But her discovery sets a fantastical underworld stirring, and a horde of daemons, witches, and vampires soon descends upon the library. Diana has stumbled upon a coveted treasure lost for centuries-and she is the only creature who can break its spell.

Diana Bishop pushed aside her magical abilities when her powerful parents were killed when she was just a child. Years later, she has become a scholar in Alchemy and early sciences without the help of magic, but when she finds a mysterious enchanted manuscript in the Bodleian Library, all sorts of things start to go wrong. First it’s the vampire and geneticist, Matthew Clairmont, who starts following her around. But when other witches and daemons start following her as well, Diana knows she has to find out what is going on.

Wow, where to begin with this book? It’s been a while since I’ve read anything so long and it took me a whole week to get through it. 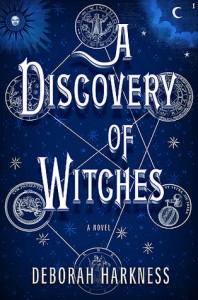 I’m a little torn with my rating – on one hand, I really loved the world that Deborah Harkness has created, with its witches, vampires and daemons living amongst the ordinary humans with the (unfortunately a little Twilight-esque) Congregation keeping tabs on them all.

On the other hand, there were things about the book that disappointed me. One was the length. At just shy of 600 pages and with rather small text, I would have expected more to actually happen in the story. As it is, we get a blow by blow description of Matthew and Diana sitting around in various houses, reading, drinking tea or wine, and eating. Diana sleeps quite a lot. Every outfit that Diana wears is described. I just felt that there were big sections that could have been left out in order to make the pace a little faster.

There’s so much character development in this book that by the end the main characters were like old friends, and I was more than a bit in love with Matthew. Who wouldn’t want a gorgeous, intelligent French vampire around to protect you all the time, even if he is pretty pushy and likes keeping fairly major secrets. Diana, I didn’t like so much. She showed plenty of emotion when the bad things were happening but I had an overall feeling that she was a bit ungrateful. Matthew wants to take her off to France in a private jet? Alright then, whatever. Buys her expensive riding gear so she can take over his stables? Okay, but these shoes are too tight, I can’t get them on. She may be rich herself from her scholarly work (that’s never really revealed) but perhaps a little thanks might be in order? Perhaps a bit of girly excitement? I know I’d be over the moon with gratitude if someone let me play around in their library of ancient texts, and I am in no way a historian.

Okay, this review is starting to sound like I didn’t enjoy the book – honestly, I really did. I kept finding the time to get through it and when the action scenes did happen it was almost impossible to put down. Likewise for the romantic parts – very swoony. I especially loved the settings of Oxford and the castle in France – both very atmospheric settings, but also the house that Sarah and Emily and the ghosts live in. Gorgeous! I also thought it was neat, although slightly off-putting, that Matthew has met nearly every famous personality in Europe in the last thousand years or so. I really enjoyed thinking about what these people might really have been like to meet.

This is a very intelligent book, rich with history and scientific theories of past and present, but also with healthy helpings of humour, action and romance. I’m looking forward to getting stuck into the second in the trilogy, A Shadow of Night, which was released back in July.

What did others think of A Discovery of Witches?

2 thoughts on “Review: A Discovery of Witches, Deborah Harkness”