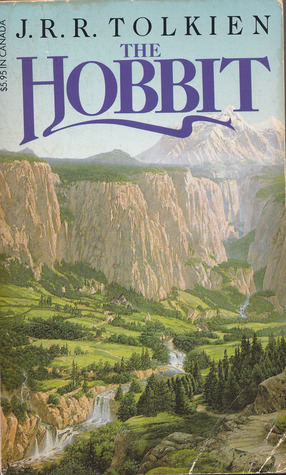 However, it is his destiny to travel to the dwarflands in the east, to help slay the dragon Smaug.

His quest takes him through enchanted forests, spiders’ lairs, and under the Misty Mountains, where he comes across the vile Gollum, and tricks him out of his ‘Precious’ – a ring that makes its bearer invisible, and wields a terrible power of its own.

Series: Stand-alone (but a prequel of sorts to Lord of the Rings)
Genre: Children’s fantasy
Published: First published by Allen & Unwin, 1937. My edition by Unwin paperbacks, 1981.
Pages: 285

In a hole in the ground there lived a hobbit. Not a nasty, dirty, wet hole, filled with the ends of worms and an oozy smell, nor yet a dry, bare, sandy hole with nothing in it to sit down on or to eat: it was a hobbit-hole, and that means comfort.

The Hobbit was many people’s starting point into fantasy as a child – in fact my father read it to me and my siblings when we were small. It was originally written by J.R.R Tolkien for his own children, but don’t be fooled – this is Epic Fantasy disguised as a children’s book.

Included in this tale are many favourite characters and creatures – hobbits, dwarves, elves and men, as well as Gandalf the wizard and Gollum. Creatures such as goblins, spiders, trolls and the great dragon Smaug round out the cast, and all are characterised and described in great detail.

The journey of the hobbit Bilbo Baggins and the twelve dwarves is no walk in the park – the party have a rough time of it, getting into trouble time and time again as they pass the Misty Mountains, through the dark and dangerous Mirkwood and to the Lonely Mountain, where the dragon has made his lair. They are constantly grumpy and complain of lack of food and comfort, are miserable most of the time and Bilbo even gets a bad cold at one point – all rather realistic reactions for a journey of such length and hardships! They do find some comfort along the way though – in Rivendell with the elves, with the great skin-changer Beorn, and with the men of Lake-town.

Even with all the trials faced by the company along the way, The Hobbit is told in a more light-hearted tone than the often grim The Lord of the Rings. There are several songs and jokes, and even the section where Bilbo is trading riddles with Gollum in the darkness is not as dark as it could have been.

The tale of the journey itself is fast-paced but still rich with description of each area visited.  I was surprised to find, though, that the story is told almost like a verbal storytelling, with a narrator breaking the fourth wall every now and then with phrases such as: “As you can well imagine.” or “Now we will return to Bilbo and the Dwarves”. It doesn’t interrupt the flow of the story at all, I just thought it unusual in Fantasy – but then this was published well before any conventions were established!

Bilbo is a very unlikely hero, taken unexpectedly from his comfortable home off on an adventure, and although he saves the dwarves multiple times, he isn’t really given the recognition he deserves until the very end of the story when the Elvenking and Gandalf praise him for all his accomplishments.

This re-read has confirmed The Hobbit as one of my favourite books of all time. If you’re looking for a Christmas present for a small (or not-so-small!) person in your life, you really can’t go wrong with a copy of The Hobbit. For a seventy-five year-old story, it stands the test of time remarkably well. Make sure you read (or re-read) the book before seeing the film!

The Hobbit: An Unexpected Journey will be released in cinemas on December 14, 2012. I cannot wait!

There’s word that they have split the story into not two, but three movies. The second part, The Hobbit: The Desolation of Smaug is due in December 2013, and the third part, The Hobbit: There and Back Again is due in July 2014 (source). I’ll be interested to see how they flesh the story out – apparently they are using extra material from Tolkien’s appendices to add content, and from the cast list it looks like several characters from LotR are included that don’t actually appear in The Hobbit book at all.

From what I can gather, the movies are geared more towards the adult Middle Earth fans than to children, which is a shame in some ways, but does allow the writers to give the story the full epic fantasy treatment it deserves.

I really enjoyed most aspects of the Lord of the Rings adaptation so I have faith in Mr Peter Jackson – and I just love the Kiwi-Middle-Earth settings. Here’s the trailer – I am sooo excited!