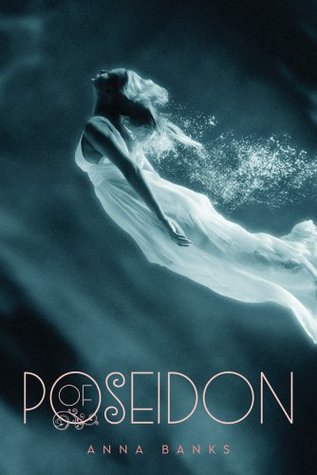 Galen is strong, protective and gorgeous, with striking violet eyes and a body to make you shiver – and that’s just when he’s in human form. He’s from the House of Triton, god of the sea, and he’s searching for a girl with the gift of Poseidon to save his brother from marrying a fraud.

Emma is a human. Or so she thinks. When Emma meets Galen on the beach, they both sense a sizzling chemistry.

But can Galen convince her that she holds the key to his kingdom – without letting on that he’s falling for her?

Of Poseidon is one of those polarising books. On the one hand, it’s a great debut with an interesting story, is quite an enjoyable read, plus it has a cover I’ve been admiring ever since it was released! On the other hand, it contains some rather major wince-worthy moments that caused a lot of bloggers to one-star this book. I’m not going to do that, because on the surface (ha ha) I quite enjoyed reading it. After I read a few reviews though, I have to agree with many points others have made.

Galen is a prince of the Syrena, ocean-dwelling shifters (mermaids, but don’t call them that!) who try not to have anything to do with humans. Galen has appointed himself as a sort of spy to keep an eye on what the humans are up to and make sure they’re not about to discover the Syrena. Then, he meets Emma on a beach in Florida. She’s a human, but he can sense her in the way that he senses other Syrena. He decides to try to solve her mystery, moving to her town in New Jersey and following her around. Galen’s brother Grom is the current King of the Titans. According to the Syrena’s accord the King must mate with a female “of Poseidon” in order to preserve the bloodlines. When Emma starts to show signs of royal gifts, Galen realises that if she is Syrena, he must do his duty and deliver her to his brother. But how can he, when he is steadily falling for her?

Emma is trying to recover from the loss of a friend when she starts getting caught up with the gorgeous Galen and his bitchy sister, Rayna. After her introduction to the world of the Syrena, she makes it her business to find out exactly what she is, without revealing that her feelings towards Galen are growing daily.

Of Poseidon is an encouraging debut from Anna Banks. Even with its interesting world-building, it did end up being predictable and more than a little shallow (sorry). I did enjoy it as a light-hearted read though, and I’ll be keeping an eye out for the next instalment.

If you enjoyed Stephenie Meyer or Lauren Kate, give this one a crack. If you didn’t, it’s probably best to keep on swimming.

What did others think of Of Poseidon?