The stakes are higher than ever in the fourth installment of the popular dwarven saga!

The Great Empire has surrounded the Kiredurks and are preparing to conquer the kingdom, but unknown to them, Kwarck, the mysterious hermit of the plains, has his own plan in action. To the east, he has summoned an elven army and charged Crushaw with leading them into battle. To the south, Roskin will gather an army from the fractured Ghaldeon lands. But to the west, an ancient and powerful evil stirs.

The Great War is about to errupt, if Roskin can overcome the Dark One…

Excerpt – from Chapter Three “The Life That Should Have Been”

Crushaw stood on a small rise beyond the farm, facing south and waiting for the elves.

He wore his full uniform, blood stains and all, and held his sword in his left hand. The tip of the blade rested on the ground so as not to weaken his arm. The wind blew from the west, whipping his gray hair across his face and shoulders. He stood motionless, staring into the distance and focusing on his plan. His scar-flecked face remained stationary, a mask of unquarried stone, and any sane person seeing him for the first time would’ve believed even the most outlandish rumor about his ruthlessness.

When the elves came into sight, a twinge of nervousness overcame him, but he pushed it aside and held his stoic gaze. They could see no hint of uncertainty or weakness in him. They marched across the open plains, ten thousand strong, in perfect unison, and their precision lifted his spirits. If they could march so fluidly already, they could learn all he had to teach. As long as his plan to gain their submission worked, they had a chance to become the army he needed to face the Great Empire.

They stopped a few yards from him, and the silence of their footsteps ending punctuated their arrival. Crushaw recognized many faces in the first two rows from the Battle for Hard Hope, and he called for them to come forward. Both lines moved ahead and followed his gesture to stand behind him. Then, he summoned the twenty-five leaders from the others, and half of the third row stepped forward. Raising his right hand, he halted them a few feet from his position.

“You have been chosen as the best of your kin, but before you can join me,” his voice boomed. “Send me your three best swordsmen.”

The twenty-five looked at each other, and then, three from their ranks moved forward one step. Each was at least half his age, their bodies long and lean with muscles like tight ropes.

“You will fight me one at a time,” he bellowed so all could hear him. “And if any of you can disarm me, I am not worthy to lead. But once I’ve defeated each, my word is law for as long
as the elves remain in my army.”

Behind him, the elves who had served with him remained silent, but a murmur ran through the mass in front of him.

“Do you all swear an oath to abide by this?”

“Yes,” the elves responded in harmony, the sound thunderous on the plains.

“Then, decide who faces me first.”

The other twenty-two rejoined the rest, and the three swordsmen moved back a few feet, whispering amongst themselves. Finally, the tallest and strongest one, a male roughly Roskin’s age drew his sword and approached. He was a Koorleine elf, with long blond hair and clear blue eyes. In one swift movement, Crushaw readied himself in middle guard, placing his feet and bending his knees for balance. His pulse and breathing slowed in anticipation. The elf also chose middle guard, his eyes studying Crushaw’s posture as he neared the old man. Crushaw held still, waiting for the elf to strike first.

With a flash of steel, the elf drove at him with a forward thrust. Crushaw slipped to the side, not moving his own blade. Agitated, the elf thrust again, faster and more powerfully this time, but again, the old man simply stepped away from the charge. Enraged, the elf slashed horizontally. This time, Crushaw stepped into the blow, blocked it with his sword, and with one twisting parry sent the young elf’s blade flying.

“Back in line,” Crushaw said, only audible to the disarmed elf.

The second soldier came forward, a female Loorish elf whose face seemed strangely familiar. Without hesitation, she attacked, swinging from high guard. He easily blocked that strike, but she spun around faster than seemed possible and slashed at his right leg. Instinctively, he used the mail cuisse on that leg to block the blow, but before he could counter, she spun the opposite direction and thrust at his left ribs. He moved just in time to avoid a fatal blow, but the blade sliced open his gambeson and raked his mail hauberk. Using his left arm, he trapped her sword against his body and placed his blade at her throat.

His right thigh throbbed from blocking the second blow, and blood tickled his left arm from a gash opened when he pinned the sword, but the third swordsman stepped up, ready in high guard. He ignored the pain and stood in middle guard. The third elf, another Loorish, was the oldest and slowly circled him. This one had watched the first fail to overpower him and the second attempt to out-quick him, so Crushaw deduced this duel would be about endurance. The elf came with a downward strike, and the old man blocked it, but the elf withdrew his blade and retreated before he could parry.

The elf switched to low guard and reversed direction, circling back. Crushaw moved with him, minding his feet on the uneven ground. Suddenly, the elf brought his blade up, aiming for the taller man’s groin, and Crushaw stepped aside just in time. As the elf retreated again, the general glared at him for the attempt. The elf grinned, changing now to middle guard, and rushed forward with a torrent of slashes. Crushaw blocked each one, but the elf was too quick for any of his parries. Through each spar, the pain in his right leg grew, and the gash on his arm now screamed. For a moment, he feared this elf’s tactics might succeed.

Then, the elf came a fourth time, again from middle guard, but this time driving straight. The old man blocked the thrust with his sword, but released the grip of his left hand and struck the elf in the right forearm. As soon as his fist found the pressure point, the elf’s arm went dead, and Crushaw easily flipped the sword from his opponent’s left hand with one twist of his blade. Then, Crushaw dropped his own sword and grabbed the elf around the throat with both hands, lifting him from the ground. With all his strength, he flung the elf towards the main crowd and then stood, staring down at nearly ten thousand elves. He composed his face into the same stoic gaze as when they had approached and remained motionless, as if daring another approach. 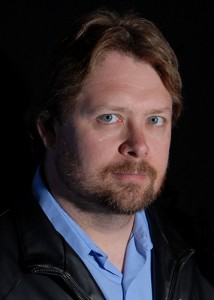 D. A. Adams is a novelist, a farmer, a professor of English, and a true gentleman. His breakout fantasy series, The Brotherhood of Dwarves, transcends genre and illuminates the human soul in all its flashes of glory and innumerable failings.

He is active on the Con circuit and has contributed writing to literary as well as fine art publications, and maintains his active blog, “The Ramblings of D. A. Adams“. He lives and works in East Tennessee, and is the proud father of two boys, Collin and Finn.

His ability as a storyteller breathes life into every character, and his craftsmanship as a writer makes these stories about relationships; human or otherwise.

The Brotherhood of Dwarves series 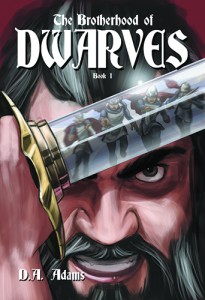 1. The Brotherhood of Dwarves (Goodreads)

The dwarven saga begins… Roskin, heir to the throne of a remote, peaceful kingdom of dwarves, craves excitement and adventure. Outside his own kingdom, in search of fortune and glory, he finds a much different world, one divided by racial strife and overrun by war. The orcs to the south want to conquer all dwarves and sell them as slaves. The humans to the east want to control the world’s resources. Caught in the middle, Roskin finds himself chased by slave traders and soldiers alike as he discovers that friendship is the best fortune of all. Just when he thinks he has triumphed, an act of betrayal sends him into bondage. His only hope of escape is the faltering  courage of a disgraced warrior whose best days are behind him. 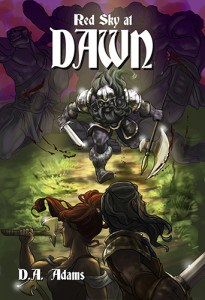 The dwarven saga grows… Crushaw, Molgheon, and Vishghu have liberated the Slithesythe Plantation. They must make their way to safe lands before being caught and returned to certain bondage. Across the orc lands, they and Roskin recruit and train an army of freed slaves, for between them and freedom are thousands of well-armed, well-trained orc warriors. Near the Pass of Hard Hope, in the shadows of the eastern mountains, they make their desperate stand. But even if they succeed, Roskin’s ordeal is far from finished, as he is haunted by visions of something awful back in Dorkhun…

3. The Fall of Dorkhun (Goodreads)

The Fall of Dorkuhn, the third installment in The Brotherhood of Dwarves series, continues the adventures of the dwarf Roskin. Having escaped slavery, and survived the Battle for Hard Hope, Roskin returns home to a kingdom divided by war with the ogres.

On one side, his father desires to restore peace. On the other, Master Sondious, hungry for revenge after having been crippled, seeks to escalate the aggression. Roskin and his friends hasten to the capital, to make a desperate attempt to resolve the growing rift, but unknown to the dwarves, new and powerful menaces threaten to destroy the entire kingdom…

One thought on “Excerpt: Between Dark and Light, DA Adams”