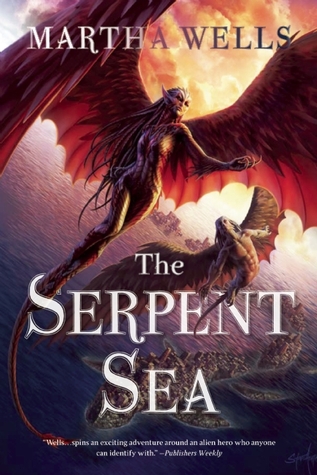 Moon, once a solitary wanderer, has become consort to Jade, sister queen of the Indigo Cloud court. Together, they travel with their people on a pair of flying ships in hopes of finding a new home for their colony. Moon finally feels like he’s found a tribe where he belongs. But when the travelers reach the ancestral home of Indigo Cloud, shrouded within the trunk of a mountain-sized tree, they discover a blight infecting its core.

Nearby they find the remains of the invaders who may be responsible, as well as evidence of a devastating theft. This discovery sends Moon and the hunters of Indigo Cloud on a quest for the heartstone of the tree — a quest that will lead them far away, across the Serpent Sea.

Please note: This review is for the second in this series, and so contains spoilers for the first book. You may wish you read my review of The Cloud Roads instead!

Moon and the survivors from Indigo Cloud court have fled their old home after the Fell devastated it. The windships bring them across the lands to their ancestral home – a great mountain tree, but when they arrive they discover that the tree’s seed is missing – the magical artefact that keeps the enormous tree alive and allows the Arbora mentors to control its growth. It is clear that the seed was stolen by groundlings within the past year, but where have they taken it and for what purpose? The quest to recover the seed takes Moon, Jade, Stone and a group of other Raksura to another established court nearby, then across the great sea to a city built on the back of a great leviathan.

The locations and landscapes in this series continue to blow me away – Indigo Cloud’s mountain tree, the Emerald Twilight court and the city on the Leviathan were intricately described and the range of different creatures and beings in this world had me thinking about it long after I had put the book down.

I think the real draw for me with this story is the way the characters interact – Moon, Jade, Stone, Chime and the other Raksura have such a teasing but affectionate way with each other that is a delight to read. Moon and Jade are together in this book, but there’s no annoying love triangle or anything, simply a happy romance.

Moon spent most of The Cloud Roads trying to work out what was going on in the court culture, but even though he has more of an idea in The Serpent Sea, he still spends a lot of the time hoping he’s not getting everything terribly wrong. I can see how this self-doubt and his general grumpiness might annoy some people but to me it was completely endearing, especially as Moon learns more about the position Consorts hold in more established courts and as he gradually decides to be himself rather than conform to what may be expected of him.

The pace is not particularly break-neck, but the adventure continuously moves forward so it never becomes tedious. The story keep developing in odd ways that I wasn’t expecting, and that kept me turning the pages.

I’d highly recommend The Cloud Roads and The Serpent Sea to anyone who would enjoy a fantasy adventure, set in an alien but beautifully described world. I’ll definitely be looking out for the third book in this series, The Siren Depths – I don’t want to stop reading about these characters!

Books of the Raksura

What did others think of The Serpent Sea?