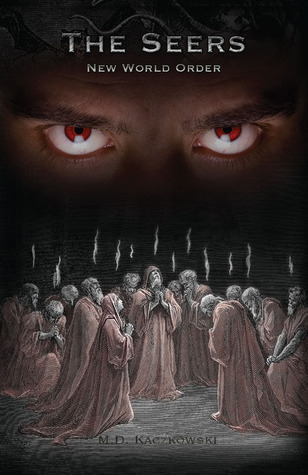 The Seers introduces a world where good battles evil for the world’s soul. The fate of humanity rests in the hands of the Seers, a handful of humans with the rare ability to see the unseen, who call their Angels into action to do battle with Demons.

NYPD Detective John Scarcepho is investigating the murder of dozens of homeless who are dead with their eyes surgically removed. As he tracks down what he believes is a crazed serial killer, he discovers that he has special powers that he had suppressed as a child. He is drafted into saving humanity by empowering his unrivalled abilities, but self-doubt, temptation, and anger challenge his ability to harness his gift for good.

This captivating, fast-paced story blends two classic genres: part apocalypse and part detective story. Through the characters’ lives, readers are introduced to the prophets of humanity, known as the Seers. Between chapters, Dr. John Alderson, a well-traveled Seer-physician, shares his inside knowledge and encourages readers to delve deeper by guiding them to sections in The Seers’ Handbook, which makes up the final third of the book. Welcome to the universe of The Seers. Your journey has only just begun.

The world as we know it is breaking down – country after country is rejecting democracy and installing a single leader – King, Emperor or Dictator. Meanwhile, in the USA, ex-cop-turned-PI John Scarcepho is investigating a series of murders in which the victims’ eyes have been removed surgically and the sockets filled with sea water. He is approached by a strange man who introduces him to the world of the Seers, a group of people with the ability to see into the spirit world and observe the battles between angels and demons for the souls of the living. As it turns out, John has a particularly powerful Archangel as his guardian, but can he gain enough control of his new power to save the world from Lucifer’s control?

The Seers is not just a story, although it is a rather enjoyable page-turning thriller. It is also a new experience in multimedia storytelling, backed by a wealth of information available to the reader through QR Codes and links at the end of each chapter, plus the extensive Seer’s Handbook in the back of the volume.

At the end of each chapter, the QR code links the reader to a page on the seers website containing information about the subject matter in that chapter. Sometimes it is just links to sections of the Handbook to further explain concepts. Other chapters contain links to news articles, videos or real-world organisations that were mentioned in the story. It’s an interesting way to get access to information about aspects of the story and adds a lot of extra depth.

Even though I found the extra information interesting when I did look at it, I found it was a little distracting at first having to pick up my phone after every chapter. After a few chapters I just kept reading the story, and only went back to look into the information further after I was finished. The way the info is linked means that you can look at as much or as little of it as you wish, and wow, there is a lot of it to take in.

Although it is stated in the start of the book that it is a work of fiction, it’s quite clear that the author has put in years of research into belief systems around the world and painstakingly collected the resources into this accessible format. It has to be assumed that he believes in the tenets to a certain degree, and at times the story itself did come across as a bit “preachy”, showing the reader that their soul is being harmed by such vices as greed, lust, arrogance and vanity and that only your guardian angel is keeping you from being possessed by a demon. That said, if you read it from the point of view of an urban paranormal fantasy, it’s a very well put together system and quite an enjoyable story. The writing itself may lack some of the finesse of a veteran author, but The Seers is still a very enjoyable debut novel and an interesting concept in the future of storytelling.

One thought on “Review: The Seers, MD Kaczkowski”