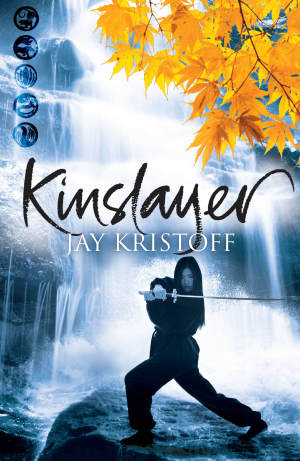 A SHATTERED EMPIRE
The mad Shōgun Yoritomo has been assassinated by the Stormdancer Yukiko, and the threat of civil war looms over the Shima Imperium. The Lotus Guild conspires to renew the nation’s broken dynasty and crush the growing rebellion simultaneously – by endorsing a new Shōgun who desires nothing more than to see Yukiko dead.

A DARK LEGACY
Yukiko and the mighty thunder tiger Buruu have been cast in the role of heroes by the Kagé rebellion. But Yukiko herself is blinded by rage over her father’s death, and her ability to hear the thoughts of beasts is swelling beyond her power to control. Along with Buruu, Yukiko’s anchor is Kin, the rebel Guildsman who helped her escape from Yoritomo’s clutches. But Kin has his own secrets, and is haunted by visions of a future he’d rather die than see realized.

A GATHERING STORM
Kagé assassins lurk within the Shōgun’s palace, plotting to end the new dynasty before it begins. A waif from Kigen’s gutters begins a friendship that could undo the entire empire. A new enemy gathers its strength, readying to push the fracturing Shima imperium into a war it cannot hope to survive. And across raging oceans, amongst islands of black glass, Yukiko and Buruu will face foes no katana or talon can defeat.

The ghosts of a blood-stained past.

Please note: This is a review for the second book in the Lotus War series, and so contains spoilers for the first in the series, Stormdancer. You may wish to read my review for that book instead!

Stormdancer was one of my favourite books of 2012. I’m happy to report that Kinslayer not only lived up to the first epic story but completely surpassed it in awesome. Excuse me while I have a bit of a gushy moment! I’ll try to describe what I love about this book without actually talking about what happens – you need to read that for yourself.

It’s been a few months since Yukiko and Buruu killed Shogun Yoritomo, losing her father and kick-starting a massive rebellion in the process. The Stormdancer and her arashitora have been travelling around to various cities, stirring up unrest and generating sympathy for the Kagé rebels. Since the fateful killing, Yukiko has struggled with crippling headaches brought on by the sudden flood of power through the Kenning, her ability to sense and communicate with life around her.  At the Kagé base in the Iishi mountains, the erstwhile Guildsman Kin is struggling to fit in with the other rebels – they don’t trust him at all and the feeling is mutual. How can their common interest in bringing the Shima Empire and Guild down progress if they cannot work together?

Meanwhile, the Guild is plotting to put a new Shogun on the Imperial throne. Can they bring the four clans together when their loyalties lie on a katana edge?

How to describe my enjoyment of this book? Passion, hatred, heartbreak and determination combine to create a truly epic tale. I couldn’t get enough of it. Don’t get me wrong, this is in essence a very dark story – desperate people doing horrible things to each other to try to free their land from tyranny or bring it back under peaceful rule. I read it mostly through a crack in my fingers and missed my stop on the train while engrossed in it.

I was hooked right from the start – the action just keeps coming and the way the paths of each group are threaded together makes it almost impossible to put the book down. There’s an almost ASoIaF-style structure to it – there are several characters telling their story throughout the book and each chapter is devoted to one character. Occasionally I found myself wishing sections would hurry up because I enjoyed some of the story threads more than others, but mostly the action is passed between the threads so the tension stays high all the way through, dodging through all the unexpected twists in the story.

The overwhelming highlight of this story for me continues to be Buruu and Yukiko’s relationship. Their often-hilarious banter lightens up what is otherwise a pretty grim tale, especially since poor Yukiko spends the entire time in agony with crippling migraines and blood pouring out of her nose. Not the most glamorous way to save the world.

There are new characters to get to know and some that were in the background become integral parts of the action. Kin’s part in this story is quite unexpected – I have no idea what’s coming for him! Also, Michi – while the consummate rebel bad-ass, she’s pretty much a psychopath. She makes me shudder, and not in a good way!

Then there’s Jay Kristoff’s writing style. I love his lyrical descriptions and settings – the action in Kigen City makes me feel all gritty and dirty, and the scenes at sea or in the Iishi Mountains are almost a relief. Although the characters tend towards the melodramatic at times, they have realistic reactions and my heart broke or rejoiced right along with them. I may have said this in my Stormdancer review, but Kristoff is not afraid to torture his darlings. It’s certainly not for the faint-hearted!

I’d recommend this series to those who enjoy gritty, raw and completely brilliant fantasy. The fact that this is described as Japanese-style Steampunk is just an added bonus, right? I cannot wait for the final instalment – in fact it is likely to be my most anticipated release of 2014. Bring it on!

What did others think of Kinslayer?