As part of the Discover Aussie Fantasy feature this month, I’m very pleased to welcome Aussie author Kate Forsyth to the Bookcase today! Kate’s historical work The Wild Girl is due for release in the UK on July 29 – make sure you get your pre-orders in for this beautiful story about the Brothers Grimm and the family who lived next door.

The Wild Girl is written from the point of view of Wilhelm Grimm’s wife, Dortchen, of which very little was recorded. How much real information did you find out about the real Dortchen, and how much about her character were you able to create?

The lives of the Grimm brothers has been extraordinarily well-documented – they both wrote so many letters and diaries and lectures and essays and books and reminiscences. There was very little documentation for the life of Dortchen Wild, however. Only a couple of letters, and a memoir she dictated to her daughter on her death-bed which is only a page long. I knew, from Grimm biographies, that Dortchen had grown up next door to the Grimm family and had been best friends with the only girl in the family, Lotte Grimm. I knew that Dortchen had had a girlish crush on Wilhelm from one of her few letters, and I knew – from painstaking research into the oral origins of the Grimm Brothers’ tales – that she had told Wilhelm almost a quarter of all the tales in the first edition of Kinder-und Hausmarchen, published in 1812. Otherwise, all I had were the dates of her birth, her marriage to Wilhelm, and her eventual death.

So I had to look to the stories that she told for a clue to her inner life. I researched into all of her tales, found out when and where she told them as much as I could (luckily Wilhelm kept very good records), and then I constructed a timeline for her. I was then able to weave a narrative around that timeline, looking all the time for the emotional truth revealed by the tales she told. I took some imaginative liberties. For example, we know that Aschenputtel, the German version of the Cinderella tale we know so well, was told by an old woman in a poorhouse in Marburg. We know someone wrote it down and sent it to Wilhelm – since that someone is lost to history, I had it be Dortchen, which meant that I got to describe a scene in the dramatic, heart-rending setting of a 19th century poorhouse. I knew her father had been religious and very strict. I looked at Dortchen’s stories and found many of them to be about a young woman’s struggle for self-determination – and so I built a story around the conflict between her duty to her father and her desire to be free of him. It is all creative imagination, because I had so little to work with, and yet I did my best to be true to the known facts and to the nature of the times.

Your characters in both The Wild Girl and Bitter Greens use herbal remedies throughout the stories for various treatments and spells. Where did your herbalism inspiration come from?
Well, I have always loved gardens and I’ve always been interested in the healing power of herbs – its a thread that runs through nearly all of my books. My own garden is a great source of pleasure to me, and I grow many herbs for cooking, and for natural remedies. One of the few things I knew about Dortchen Wild was that she was the daughter of an apothecary, and that her father had a famous garden outside the city walls of Kassel in which he grew many plants for medicinal uses. This appealed to me, and it seemed natural to me to make Dortchen a girl who loved the green places like I had always done. It was really interesting researching 19th century apothecaries, and beliefs of the time about flowers and plants and cooking and healing.

You’ve been doing a lot of travel for your recent historical works. Can you tell us about one or two of your favourite places you’ve visited so far?
I have to say the research trip for BITTER GREENS was the trip of a lifetime. My children and I went to Paris and the south of France, and to Venice and the Italian lakes – it was utterly magical and wonderful. We were away for a month – my children are used to travelling with me for research and so we have a good routine. They go with me to churches and museums and castles and palaces, and then they read or play cards at night while I write; and in return they get to do amazing things like go to Disneyland in Paris, or do a midnight ghost tour in Venice.

In the past, my children have gone with me to Scotland for The Puzzle Ring, all around London and southern England for The Gypsy Crown, and to Fiji for a tour and writing retreat I did there – they’re lucky kids!

I left them at home for the Wild Girl research trip, though. I was travelling the fairy tale road in Germany, which they were a bit old for now, plus they had school and sport commitments that made it hard to take them on the road for a month. I left them at home with Dad, and I travelled alone, researching and writing at high intensity. It was amazing, but a little bit lonely. I missed my family!

Can you share with us what you’re working on next? (if it’s a secret then that’s ok!)
I’m now writing a 5-book fantasy adventure series for children aged 9-12, which will come out late 2014 and early 2015, and then I plan another historical fairy-tale retelling for adults. I aim to retell one of Dortchen’s most beautiful and powerful stories, a Beauty and the Beast variant called ‘The Singing, Springing Lark’. It’ll be set during the Nazi era in Berlin, Germany, and I can hardly wait!

Thanks so much for your answers, and best of luck with your current projects! 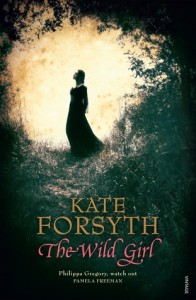 Dortchen Wild fell in love with Wilhelm Grimm the first time she saw him.

Growing up in the small German kingdom of Hessen-Cassel in early Nineteenth century, Dortchen Wild is irresistibly drawn to the boy next door, the young and handsome fairy tale scholar Wilhelm Grimm.

It is a time of War, tyranny and terror. Napoleon Bonaparte wants to conquer all of Europe, and Hessen-Cassel is one of the first kingdoms to fall. Forced to live under oppressive French rule, the Grimm brothers decide to save old tales that had once been told by the firesides of houses grand and small all over the land.

Dortchen knows many beautiful old stories, such as ‘Hansel and Gretel’, ‘The Frog King’ and ‘Six Swans’. As she tells them to Wilhelm, their love blossoms. Yet the Grimm family is desperately poor, and Dortchen’s father has other plans for his daughter. Marriage is an impossible dream.

Dortchen can only hope that happy endings are not just the stuff of fairy tales. 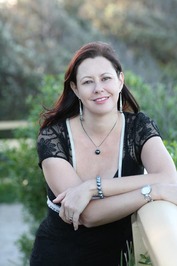 Kate Forsyth wrote her first novel at the age of seven, and is now the award-winning & internationally bestselling author of more than 20 books for both adults and children.

Her books for adults include ‘The Wild Girl’, the love story of Wilhelm Grimm and Dortchen Wild, the young woman who told him many of the world’s most famous fairy tales, ‘Bitter Greens’, a retelling of the Rapunzel fairytale, and the bestselling fantasy series ‘Witches of Eileanan’. Her books for children include ‘The Gypsy Crown’, ‘The Puzzle Ring’, and ‘The Starkin Crown’

Kate is currently studying a doctorate in fairytale retellings at the University of Technology, Sydney