It’s time for a look back over the past week, and to see what’s coming up. This feature is based on the original Clock Rewinders on a Book Binge.

Last Week on the Bookcase

It’s been another busy week around here. On Monday Mr Ang had hernia surgery, so the rest of his week has been pretty much spent in bed or on the couch, and my week has been at home looking after him. Add to that that this weekend I decided to try some intensive toilet training with my Sproutling, and I am absolutely exhausted.

In all the busy I managed to completely miss my blogaversary! Yes, The Oaken Bookcase has existed for a year now, although I started at wordpress.com and only moved to my own domain in March 2012. I’m planning on a celebratory giveaway of some sort so keep an eye out for that, probably around the middle of March. This blog hasn’t quite got the following of other blogs that have been around for a similar time, but I have had a ball putting it together and I hope those of you who are regular readers or occasional visitors enjoy it and/or get something useful from my ramblings!  Thank you all <3

Despite all that I am still managing to find time here and there to join in with the Wicked Valentine’s Read-a-thon! It started on Thursday 7th but there’s still time to join in if you wish to! Just check out the details at My Shelf Confessions. You can find all my goals and updates on my WWReadathon post!

Reviews (since the Jan update):

Here’s a new section I’ve decided to add – a bit of an update on my current goals. This is pretty much me forcing myself to check the goals more often 😉

Happy lunar new year! It’s the end of the year of the Dragon this weekend, and the start of the Snake. I completed my reading goal of five Dragon books, but reading five Snake-related ones may be slightly more tricky!

The only loot for this week is my Kindle copy of Scarlet! But honestly, that is totally fine with me – I have faaaar too much to read! 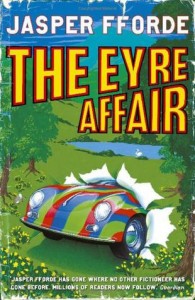 There is another 1985, where London’s criminal gangs have moved into the lucrative literary market, and Thursday Next is on the trail of the new crime wave’s Mr Big.

Acheron Hades has been kidnapping characters from works of fiction and holding them to ransom. Jane Eyre is gone. Missing.

Thursday sets out to find a way into the book to repair the damage. But solving crimes against literature isn’t easy when you also have to find time to halt the Crimean War, persuade the man you love to marry you, and figure out who really wrote Shakespeare’s plays.

This month’s bookclub read came highly recommended, but I’m not sure so far. I read Fforde’s The Last Dragonslayer a couple of weeks ago and so far this one has a very similar style – heavy on the puns and lacking in character a little. I hope the literary references continue to make up for it!

Have a great week everyone!